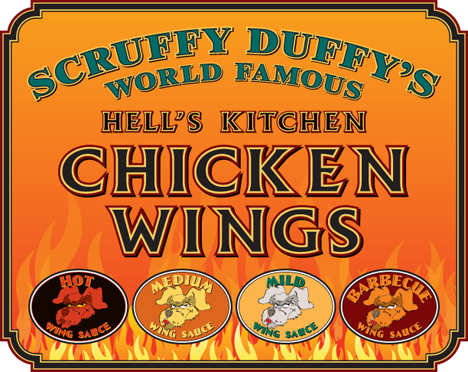 Out went the old steam table, quite popular in NYC bars in the 70’s & 80’s, and in came a new menu of made to order bar food, with buffalo style chicken wings the star. The very first week of the new menu, a gentleman at the bar exclaimed, “these wings suck”! Rather than take offense, Pat welcomed the stranger’s criticisms and listened as the man rattled off a list of ingredients and sent him to the supermarket.

When Pat returned, the man led him into his own kitchen, rolled up his sleeves and taught him how to properly fry the wings to perfection and to make the now famous Scruffy Duffy’s Wing Sauce. From that moment on, the business boomed. That nameless gentleman - who had never set foot in the bar before that day and was never seen there again - has no idea the impact he had on their lives. His simple act of kindness was life-changing and is what makes Scruffy Duffy’s wings so special.

Scruffy Duffy’s was a victim of the Times Square redevelopment and was forced out of the original location in February 2008. Now in 2019, the time was right to bring back Scruffy Duffy’s. We knew we wouldn’t be able to replicate all the wild times of yesteryear, but in this day of cell phone addiction, online dating, and ordering food in as you stream your favorite shows, maybe there is a place in this world for Scruffy Duffy’s. A place where you can meet up with your friends old & new and enjoy the friendly atmosphere while you sample the wings, drink your favorite beer and catch your favorite game one of our screens!